Any one of these things could have grabbed me, but all of them together? Even if I hadn't written this, I'd HAVE to try them!

We had an excess of hamburger sitting around and were tired of burgers (we've had them on the grill several times lately and though I love them, sometimes you CAN have too much of a good thing) so I was trying to come up with something else to make. There's the obligatory meatloaf (which I love) but that's the "normal" fallback I use with hamburger...next idea...

My wife suggested meatballs. She's mostly a vegetarian and even when she ate meat she was never a beef fan so I figured if she'd at least think about trying them, I'd make some.

Meatballs are one of those things that we rarely had growing up in the Midwest - though I think it was mainly because my dad didn't care much for them. I've made them a couple of times but it's never been a real part of my repertoire - until now. Since my son LOVED them and my vegetarian, beef-hating wife even decided to try them and liked them I think it's a necessity that it become a staple around here.

I think that after trying them, you'll feel the same way!

You can eat these as is, slice them up with a bit of BBQ sauce or do what we did and make meatball subs.  If you haven't made them before, it's VERY simple.


*If you can't find grinder rolls a hot dog bun will do, but really isn't big enough (for non-New Englanders, a grinder is the same thing as a hoagie or submarine sandwich, so in other words, it needs to be a big roll!).
Posted by Gary McNeff at 10:24 PM No comments: 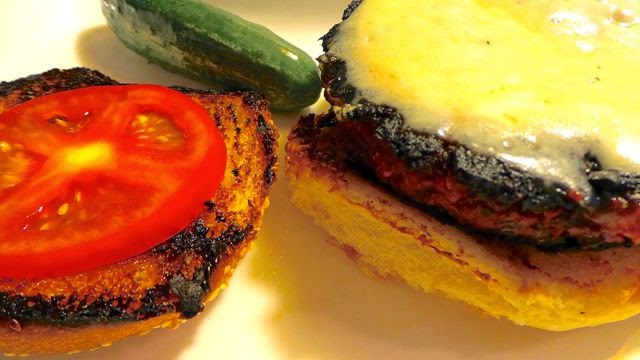 Now that summer is finally here I'm able to do one of my favorite types of cooking - smoking meats. To me, nothing says summer quite like the smell of wood burning over an open fire and meat slowing cooking and absorbing the flavor of the smoke. When I smoke something, it's most often a brisket. If you've never had any kind of brisket other than the corned beef type for St. Paddy's Day, this is very different.  You actually start with a brisket that has NOT been "corned" (which is basically a type of brining using a similar brine to that used to make pickles). It's simply a cut of meat like any other that you would get from your grocery store that you then use your smoker to turn into a very tender slice of heaven.
But I didn't always have a smoker (or a grill) to cook my brisket (and I know not everyone does whether it's because they wouldn't use one, don't want one, live in an apartment and can't have one or any of a thousand other reasons). When I was young, my mother always made this for us - and we didn't have a smoker then either. There IS a way to get a similar, smoked flavor to your brisket without smoking it - and that's what I'm here to help you with.  I'll tell you upfront that it's not going to have the same type of look to it that you get from cooking in a smoker - no "bark" (the cooked exterior) and no "smoke ring" but you DO get a smoked flavor and that's the most important part.


My family has been giving out this same basic recipe for years - I've made a few alterations here and there but it's basically the same as it was when I was a kid (and that's more years than I care to count).

If you decide to try it, let me know what you think!

Watch how to make it here!
https://www.youtube.com/watch?v=qvX-_rzkh1k

*There are different cuts of brisket: the flat, the point and a whole brisket which is sometimes called a packer brisket (a whole or packer brisket is both the flat and point together, simply not separated. Also, I mentioned this before, but it's worth mentioning again - you do NOT want a corned beef brisket).

I typically use either a whole or flat cut. Beef prices have risen so much that when I bought a brisket last week, whole briskets were $3.39/lb and flats were $7.59/lb.  For that, you can get a whole brisket that weighs twice as much for the same amount as a flat.  I bought an 11 pounder, removed the point and was left with seven pounds for the flat and paid less that I would have for a five pound flat.  I then had four pounds of point to turn into burnt ends (arguably the best part of a brisket) for far less than the equivalent flat cut.

**There are LOTS of different kinds of rubs and just as many opinions as to which one is best. I suggest either finding a rub recipe you think you'd like and trying that or simply buying one at the store (you'll have a lot to choose from). Here is a link to one that I've tried before and really like, but again, feel free to use whatever YOU prefer. When we were younger, we didn't use a rub at all - we simply used the celery seed on top of the brisket along with the liquid smoke and that works as well!

***Liquid smoke is one of those things that a lot of people seem to either have never heard of or are kind of confused about. Exactly what is in it? Well, if you buy Wright's, the answer is water and hickory smoke concentrate.  It is actually made from hickory (or applewood or mesquite depending on the type you buy) wood that is burned inside a chamber. As the smoke rises it is captured in a condenser and it cools. The cooled smoke forms water droplets (condensation). These droplets are then collected and filtered.  That's it. No other additives (which is one of the reasons I prefer the Wright's brand - there are other brands and they typically have additives).

This needs to sit overnight, so start the DAY BEFORE you want to cook the brisket:

When ready to cook: