It seems like everyone has their own way to make BBQ chicken - but I've had a LOT of people ask me about the best way to do it.  I'm sure it has something to do with the fact that we make and sell our own sauces and rubs but this is actually a question I've been getting for far longer than we've been doing that.

From what most people tell me, the most common problem seems to be that they burn the outside of their chicken while the inside is still not done. And there aren't many things less appetizing than biting into what looks like a delicious piece of chicken and then finding that it's still pink (or red!) in the middle.

I'm going to tell you how to avoid that - or at least how I avoid it. I remember both my grandfather and my mother doing this as far back as I CAN remember. Of course, they didn't use our rub, since we just developed that particular product. What we used instead of rub was a mixture of sugar and chili powder sprinkled on the chicken (if you want to try this, it IS good - simply not as good as the rub) mixed until it resembled the traditional cinnamon/sugar mixture most people are familiar with.

The other nice part about this is that you can still have "grilled" chicken without the grill if it's too hot, rainy, snowy, or cold outside or if you simply don't have a grill. Instead of cooking for the last few minutes on your grill, just use a preheated cast iron grill pan. You'll get the same grill marks and for the most part, the same flavor (some people debate whether or not the open fire on a grill actually adds any flavor - I tend to think it does but wouldn't argue with those that feel the opposite).

Brining is NOT difficult - quite the contrary. I'm sure you can find some very complicated brines in that search that you just did, but it's really not necessary. The one I use is called "Not Just For Turkey".  The directions are on the package, but essentially, you use 1 tbsp of the brine mix with 1 cup of liquid (water, apple cider, wine, etc.).
A common misconception about brining is that it makes things salty: WRONG!! Yes, there is salt in the brine, but it doesn't make it taste salty - at all.

So, without further ado, here it is:


*NOTE:  I don't list the amount of rub here simply because you're going to sprinkle the rub liberally on the chicken and it's going to depend on the size and number of the pieces of chicken you're using.  Similarly, the amount of brine mix you will use will depend on the size of the container you're using.  You need to make enough to cover the chicken.

The nice thing about employing this method is that your chicken is going to be some of the moistest, juiciest BBQ chicken you've ever had! Some people like to parboil their chicken, but that makes the meat have a rubbery texture and loses the flavor - parBAKING with a rub is the best way!

Let me know what you think in the comments if you try this!! 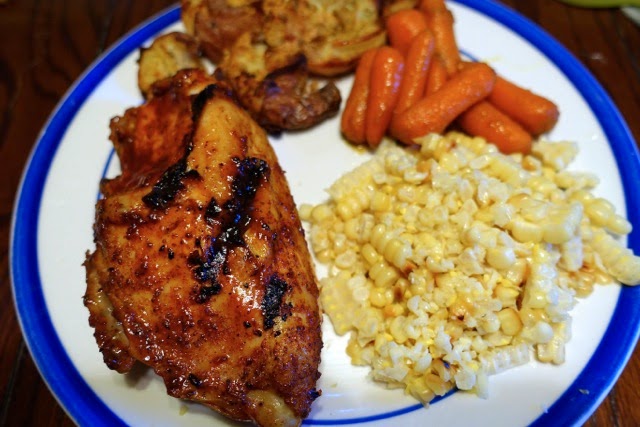