Hawaiian Luau in the Smoker!! 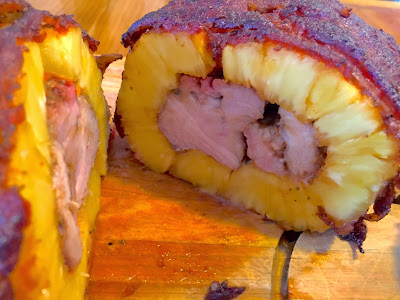 Okay, okay, I know I haven't posted in a long time.  It's just a case of life getting in the way (new house, new job, etc.) but I'm going to get better.  I promise.  Well, at least until the next time life gets in the way again...

But I digress!  I'm writing this particular recipe up because I don't think anyone should have to miss trying this at least once in their lives (well, except for vegetarian/vegans - this is pretty much a meatfest, so you're completely off the hook for reading this one).

A friend of mine tagged me on Facebook the other day with a picture of something that looked amazing - there wasn't much in the way of directions, but I can deal with that (I'm pretty good at making stuff up on the fly).

It was basically pork ribs, inside a hollowed out pineapple, wrapped in bacon - and then put on the smoker.

I know some folks are probably thinking that it doesn't sound so good - but pork and pineapple go REALLY well together (think of a Hawaiian luau).  If you brine the pork first and use a great rub (Mac Brothers Pork and Poultry Rub - hint, hint), it's even better!

As great as it sounded to me, I decided I also wanted to try basically the same thing with kielbasa inside instead of the ribs (I'd LOVE to try both together, but I'd have to find a MUCH bigger pineapple first!) - so of course, I made two so that I could try each one.

So, here it is.  If you decide to try it, please let me know what you think!

OR
*NOTE: Any rub you like will work.  I don't list the amount of rub here simply because you're going to sprinkle the rub liberally on the pork and the outside of the pineapple. It won't take much at all if you're only using what you can fit inside the pineapple - a bit more if you're smoking extra ribs at the same time.

Brine**
**NOTE: This recipe makes enough brine that you could actually do twice the number of ribs in this recipe.