Anyone that knows me knows about my potato fetish - give them to me in just about ANY fashion and I'm happy. If that fashion happens to have been fried, has onions and I can add sour cream to it, that simply adds to my happy factor!

This recipe has all the above and this morning I was a happy camper indeed. (Well, I really wasn't camping; just an expression, but I WAS a very happy cook!)

We never had potato pancakes growing up; plenty of fried potatoes (what they call home fries here in New England) but never potato pancakes.  I didn't try them until I was in my thirties, and then the ones I had weren't very good. They were the frozen ones at a cheap diner somewhere so I didn't try them again until three or four years ago. THAT time I had good ones and I was hooked. I tried many times to replicate them at home and they always came out too starchy or too "thick" - more like a blob of potatoes than what I had come to know and love.

I had noticed the same thing anytime I tried to make hash browns (another favorite and not really that different than potato pancakes). A couple of years ago I stumbled across an easy trick to make your hash browns MUCH better (and lighter!). After shredding them, remove as much starch as you can by placing them under running water or simply soaking them.  If you do that, they will improve immeasurably.

Last night while I was trying to fall asleep I was thinking about surprising my wife with breakfast this morning (I'm strange) and thinking about making her hash browns. I had one of those odd little leaps in my brain and suddenly thought that I could apply the same principles (removing as much water as possible) to potato pancakes. It made a lot of sense to me (though admittedly, thinking about it when I was trying to sleep did NOT make a lot of sense). Unfortunately, I didn't sleep well because I kept thinking about how good they would be if it worked. Lucky for me (and now you!) it did and I'm going to tell you exactly how I did it if you care to follow along. If you do, you'll be rewarded with some of the best potato pancakes you've ever had - and if you don't, just maybe you learned something that will help the next time you decide to make hash browns.  (I do realize that this is probably common knowledge amongst many chefs, but it was a huge revelation to me!)

Olive oil and butter for frying

*these are NOT traditional, but they ARE good!


NOTE: These are actually great to do ahead if you are trying to make them as a side for other things. Either keep them in the fridge for a day or two or just keep them in a warm oven while you're cooking everything else. If they've been in the refrigerator, reheat them in a single layer on a cookie sheet in a 400 degree oven until they crisp up again.

Latkes are traditionally served with sour cream or applesauce. Either way (or plain!) it's hard to go wrong.

Enjoy! And if you try them, please leave me a comment and let me know what you think. 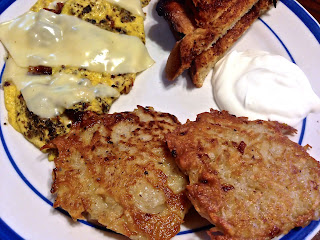