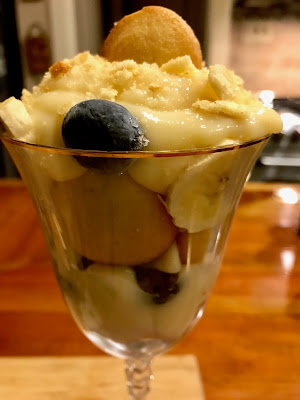 This is the first recipe I ever posted.  I've posted over 50 since then and when I went back to look at this one (and many of my early posts) I realized I needed to give them a makeover.

No pictures, poor instructions.  It's no wonder no one really looked at them.  Hell, if I looked at them I'd pass on to the next one as well.

So here is the original post, with some changes to make it a bit easier to follow and some pictures to help clarify any steps.

This pudding recipe is STILL one of my, and my family's, favorites.

I gave a lot of thought to what the first recipe I post here should be.  I came up with something that has been a standard in my family for a very long time - and has the benefit of being incredibly versatile.

Yes, pudding.  I know, anyone under 30 has probably never even had homemade pudding - the Jello stuff in a box is all they know.  Even my wife had no idea you could actually make it from scratch.

The real thing is SO much better...and not much more effort.

This recipe goes back to my grandmother and my mother - with a special thanks to my brother Larry who made it a LOT when we were kids.  This recipe is for the basic vanilla but with a little effort can be turned into many different varieties.  As kids, the simplest was either slicing bananas for banana pudding or adding cocoa powder for chocolate pudding. 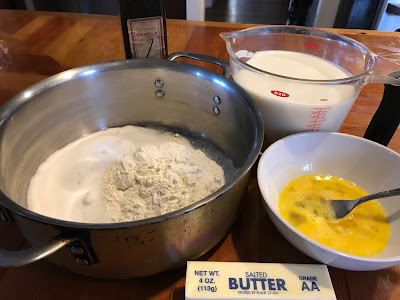 1 c flour
2 c sugar (You can cut back on the sugar if this is too sweet.  I've used anywhere from only 1 cup to the full two cups.  The original recipe is two cups but as I've gotten older I prefer it a bit less sweet.)
4 c milk
2 eggs (beaten)
1/2 stick butter
1 tbsp vanilla extract
5 tbsp cocoa (optional; specifically if you want to make chocolate pudding instead of vanilla)

You can easily alter this recipe for whatever you'd like.  As you can see in the ingredient list, if you add cocoa you get chocolate pudding.  Lately I've also added a chopped up Lindt dark chocolate bar to make it have more of the dark chocolate flavor I've come to love.

If you want to make a pie, simply add an extra half cup of flour and three and a half cups of milk instead of four to get a thicker consistency.  Use that to then fill the pie shell.

This works well if you line the shell with bananas and then add vanilla pudding or just add the chocolate pudding for an awesome chocolate pie.  I've made a chocolate-peanut butter-banana pie by lining the shell with bananas, heating up some peanut butter and pouring it on top of that, then adding chocolate pudding and refrigerating.  That particular pie was gone within about ten minutes of serving it.  I've also made butterscotch pudding by following the same basic recipe.

The most important thing with this recipe (in my book, with cooking in general) is to NOT be afraid to try something different!!!  Experiment - the worst you can do is not like it and start again...and that's half the fun.
Posted by Gary McNeff at 5:45 PM

Email ThisBlogThis!Share to TwitterShare to FacebookShare to Pinterest
Labels: Breakfast, Desserts, From Coupons to Cuisine, Vegetarian