Have you ever made a pork roast and had leftovers and didn't know what to do with them? Well, I'm here to tell you what we do with ours - and that sometimes we make an entire pork roast just so that we can have these tacos.

First, what are tacos al pastor?

Tacos al pastor likely originated from Lebanese immigrants who made their way to Mexico and brought shawarma with them. Like any food that emigrates from one place to another, changes are made to include locally available ingredients and to suit local palettes. In this case, the meats were flavored with various chiles and then topped with a pineapple while roasting. Both tacos al pastor and schawarma are marinated meats that are placed on a vertical spit that is rotated alongside a source of heat and then thinly sliced as the meat cooks (I was also reminded of the meat you may have seen if you've ever ordered a gyro). Schawarma can be lamb, chicken, turkey, beef, veal, or even mixed meats, but tacos al pastor are pork.

We heard of them for the first time when we were in Puerto Vallarta a few years ago. They were selling them from a little cart so we decided to indulge and try them, not really expecting much. Boy, were we wrong. They were delicious! We had them again (several times) when we were in Cancún three years ago and order them at the few local restaurants here that have them (though none can equal what we had in Mexico).

My version isn't terribly complicated - it's actually very simple but still has a very similar flavor and has been very popular with everyone that has tried it.

When we were in Cancún it was served with a number of items on the side to top them with: fresh pineapple, cilantro, and thinly sliced cabbage and onions (as well as cheese, sour cream and fresh limes). As odd as topping your tacos with pineapple or cabbage may sound, the mixture of the spices in the meat and the sweetness of the pineapple is incredible. The cabbage adds a bit of "crunch" and the cilantro really completes it. But what really makes it special is the pork itself - I cook mine on a rotisserie which leaves it crispy on the outside. When you then put the leftover pork and some spices in a skillet and brown it, it gets nice and crispy and melts in your mouth.

So, here is my version of tacos al pastor! I'm writing this up for two pounds of leftover roast, simply because that's what I had.  You can very easily adjust the seasonings for whatever amount you may have available. 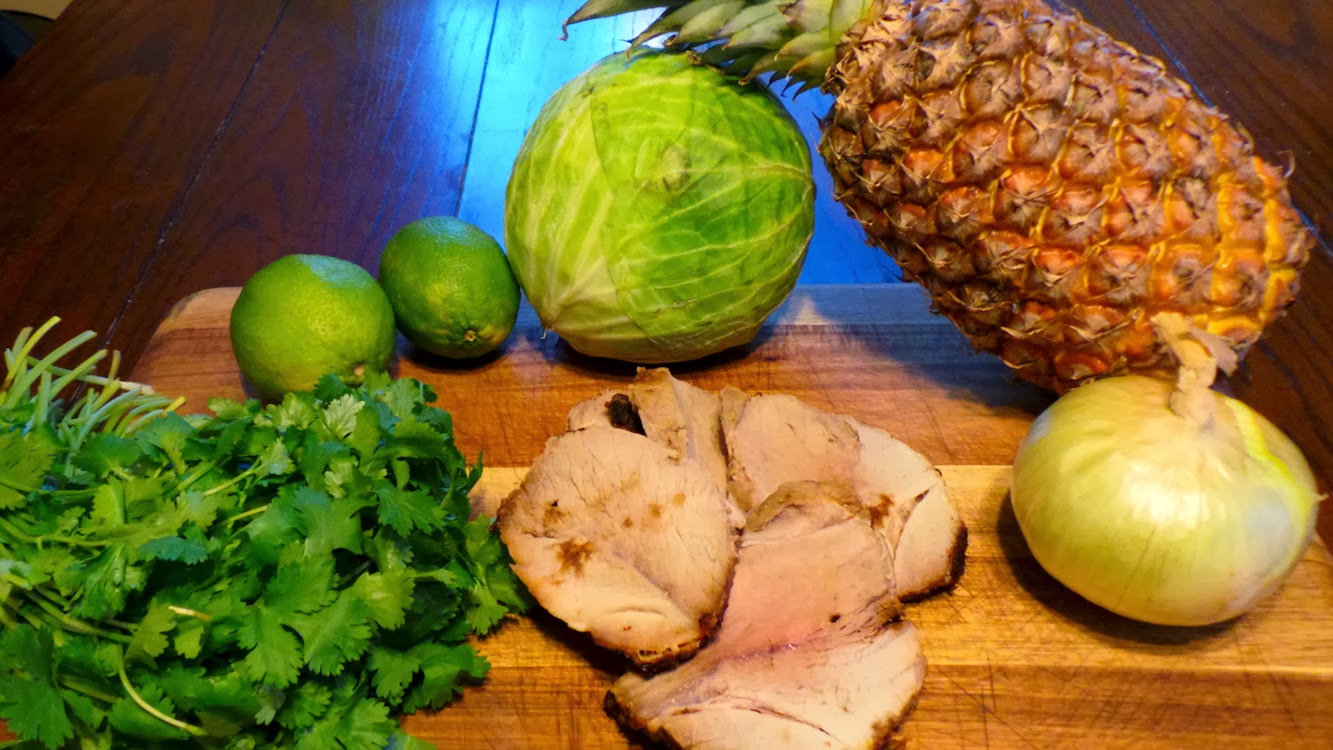